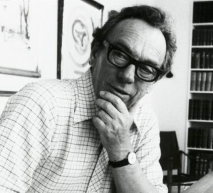 Henning Koppel (1918-1981) studied at both the Danish Royal Academy of Arts (1936-1937) and Academie Rancon (France) (1938). He originally aspired to be a great sculptor, but circumstances directed him toward a more financially rewarding decorative arts career. The award-winning silver designer for Georg Jensen, Inc. eventually redirected his talents to porcelain and joined Bing and Grondahl in 1961. Koppel’s signature “pregnant curve” wasn’t fully appreciated by the public, but it won him many awards including the 1951 Triannale Gold Award for the pitcher above left. Koppel also contributed to the design catalogs of Holmegaard and Louis Poulsen & Co (lamps).

Self-taught designer and early plastics pioneer, Neal Small (b. 1937) was known as the “Prince of Plastics” in his Chelsea neighbor where he opened up shop in the 1960s.

Before he left plastic industrial design to concentrate on a quiet life in the woods of Maine, Small created a number of innovative and iconic designs, including the “Origami” magazine holder and the Model 5031 acrylic coffee table. The 5031 coffee table, crafted from a single sheet of acrylic, was lauded as one of the purest modern forms of the time. Small still resides in Maine, and if you’re lucky, you may catch a glimpse of him driving around town in his black Subaru…that just happens to be adorned with black rats. Plastic ones, of course.

Finnish industrial designer, Tapio Wirkkala (1915-1985), was a master in the many mediums he used for his designs in glassware, tableware, cutlery, jewelry, art glass, furniture and more.

An artist and sculptor at heart, Wirkkala’s work took a necessary, practical approach after the war and turned to industrial design. A recluse that preferred the isolation of the woodlands of Lapland, Wirkkala’s main inspiration was nature and the frozen landscape of his homeland. He translated that love of home into some of his most well-known designs such as the iconic Ultima Thule (Ultima Thule is a mythological distant place located beyond the “borders of the known world”) and Aslak (a Finnish boy’s name meaning “supporter of Thorgest,” a 9th century Viking chief) glassware for Iittala.

Wirkkala also created an extensive collection of porcelain and stoneware for Rosenthal Ag starting in 1956, a career which produced eight tableware services and over 200 porcelain decorative objects, and colorful, blown glass for Venini.

And while Wirkkala is known for some of the most beautiful, modernist housewares of the mid-century, he’s also known for many utilitarian masterpieces. A plastic ketchup bottle (Paulig Company), an incandescent light bulb (Airam), the Finnish markka banknotes (1955-1981), and the Finlandia “Frozen Ice” vodka bottle (1970-2000).

A modest man, Wirkkala was “a maestro without a maestro’s affections.”

In 1944, a formerly lucrative pottery factory, Joaquin Pottery, having suffered the effects of WWII, sold their factory to Nancy Ann Abbott, owner of Nancy Ann Dressed Dolls. “Story Book Dolls,” made of bisque pottery, were manufactured at the factory until around 1948, after which Abbott switched to hard plastics to create her dolls. No longer needing the pottery factory, it was sold and renamed Laurel Potteries of California. Laurel Potteries used an electromagnetic process to remove iron from their clay which was then used in flat plate and slip pottery pieces. By 1953, the factory doubled in size and their pottery lines could be found coast-to-coast in high-end department stores like Bloomingdales, Wannamakers, Macy’s and The May Company. During the 40s and 50s, Laurel Potteries produced several successful MCM dinnerware lines. California Life, California Seaside and Cerama-Stone were designed by in-house designer, Ted Scarpino; California Holiday was designed by award-winning potter Edith Heath; and California Living, which won the Museum of Modern Art’s “Good Design Award” in 1951, was designed by Caleb Jackson and Ted Scarpino. After two decades of steady growth, Laurel Potteries suffered a setback that crippled the once thriving business – lead poisoning. After two reports of poisoning connected to the Cerama-Stone line, and subsequent attempts to rework the glazes to prevent lead leakage, Laurel Potteries ceased operations and sold the plant to Sylvan Ceramics. Laurel Potteries pieces are still readily available and collectible.

“There are no ugly objects, they need only be displayed properly.” –Franco Albini

Franco Albini (b. 1905) was an Italian Neo-Rationalist architect and designer. Neo-rationalism was a minimalist aesthetic movement that emphasized geometric forms and raw materials. Unlike its neo-classical predecessor, neo-rationalism eschewed ornamentation, and emphasized the practicality and functionality of a structure.

After earning an architecture degree in 1929, Albini joined Studio Ponti é Lancia and became an assistant to Gio Ponti and Emilio Lancia. By 1931, and during the height of Benito Mussolini’s fascist regime, Albini opened his own practice with partners, Renato Camus and Giancarlo Palanti. Together they designed “social housing” for the Instituto Fascist Autonomo per la Case Populari.

While many of Albini’s contemporaries fell victim to Mussolini, Albini persevered and explored new progressive design despite the watchful eye of the nationalist regime and the ravages of WWII bombing on Milan. By 1945, with the end of Mussolini’s regime and the reintroduction of democracy in Italy, Albini began a new era of modern design and introduced the iconic designs we know today. He received three Compasso d’Oro awards, Italy’s most prestigious design accolade. While Albini’s designs for Mussolini’s regime were out of necessity, his desire to “make rational order” of a city torn by war continued throughout his career through his large-scale civic architecture. Albini was awarded his 3rd Compasso d’Oro award for the Milan subway stations in 1964.

Considered a “founding father of Italian design” by many, Albini preferred to call himself a “craftsman.” “It’s through our works that we can best spread our ideas rather than by speaking.”

“Any work of Architecture that does not express serenity is a mistake.” -Luis Barragan

Regarded the “most prominent” Mexican architect, Mexican Modernist, Luis Barragan (b. 1903), was known for his colorful, modernist homes outside of Mexico City.  Barragan, one of nine siblings from a wealthy Mexican ranching family, was an aesthete from an early age.  In a local newspaper, he was quoted as saying that he would notice “the play of shadows on the walls…and how the look of things changed.”

After graduating from the Escuelo Libre de Ingenieros in Guadalajara in 1923 with a Civil Engineering degree, Barragan traveled to Europe and lived in Morocco where he was exposed to Mediterranean and North African architecture.  He was also introduced to the writings of landscape architect, Ferdinand Mac, as well as meeting Le Corbusier, both of whom would be influential throughout his career.  But unlike Le Corbusier, who believed a house should be a “machine for living,” Barragan believed his homes should be a “refuge” and not a “cold piece of convenience.”  Barragan eschewed the trend of functionalism and minimalism, and devoted his life to creating “emotional architecture.”  A gifted landscape architect, he developed his own style using “natural siting,” taking great care to incorporate the natural features of the landscape into his buildings.

Barragan’s designs were also reflective of the Mexican climate and culture.  The harsh climate necessitated “structural simplicity” and “few materials.”  The intense sun and wind, as well as economic restrictions were major influences.  Barragan, instead, used this to his advantage.  The walls of the courtyards would block the winds and serve as canvases for sunlight and shadows.  Walls were placed so that sun would cast a variety of shapes onto the courtyards throughout the day.  Using hidden openings to capture sunlight, shafts of light would serve a dual purpose of art and lighting.

In addition to being a gifted architect and landscape designer, Barragan was a talented furniture designer, although he only designed for individual projects.

His work has been described as “poetic,” “mythical,” and “monastic.”  Barragan’s devotion to  Catholicism can be seen in his work.  He created homes, as well as religious spaces, that  reflected quietude and meditation.

Barragan was an intensely private man so little is known about his personal life.  Anecdotes point to a kind, but somewhat eccentric man.  He was a generous gift-giver and he supported and encouraged fellow artists by commissioning works for his projects and personal home.  He wore English sport coats and ascots, and was known to cancel lunch plans “if the light was not right.”

In 1980, Luis Barragan won the “nobel prize of architecture,” the Pritzker, “for his commitment to architecture as a sublime act of the poetic imagination.”

Luis Barragan died from complications due to Parkinson’s Disease in 1988.

“Solitude.  Only in intimate communion with solitude may man find himself.  Solitude is good company and my architecture is not for those who fear or shun it.” -Luis Barragan

Frederick Kiesler (1890–1965) was a polarizing figure that stirred conventional thought and caused consternation with his outlandish ideas of curved walls and biomorphic furniture featured in his 1942 interior design for Peggy Guggenheim’s “Art of This Century” gallery. Kiesler arrived in New York in 1926 from his homeland of Ukraine, bringing with him avant-garde ideas learned as the youngest member of de Stijl. Kiesler was a multi-disciplined artist that believed “form does not follow function. Function follows vision. Vision follows reality.” Called “the greatest non-building architect of our time,” Kiesler’s unbuilt visions of a home that connected to its inhabitants through solar energy, sensory lighting and large screens splashed with art seem prescient of today’s interactive and electronic home innovations. Deemed a charlatan by some and a visionary by others, Kiesler’s evocative ideas continue to be thought-provoking.