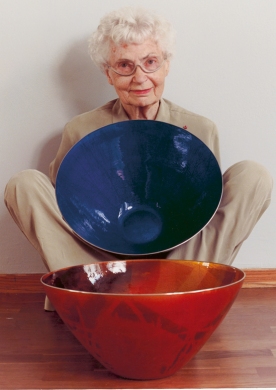 Norwegian, Grete Prytz Kittelsen (b. 1917) was a 5th generation goldsmith and enamel artist. Her exposure to the arts came early, as her father was a rector at the Statens Håndverks-og Kunstindustriskole (SHK), and would often host students and lecturers at their home. It was natural that Kittelsen would follow the family tradition, so in 1941 she earned a degree from SHK in goldsmithing and shortly after joined her family business, J. Tostrup.

In April 1940, Nazi Germany invaded Norway and began an occupation that threw neutral Norway into turmoil. Kittelsen rejected the occupation and involved herself with the Norwegian Resistance. While it is unknown whether Kittelsen’s activities with the resistance were more than passive acts, such as refusing to speak German or to sit next to a German soldier on public transport (which resulted in a law being passed that a passenger must sit in any available seat while on a public bus), her involvement was enough to force Kittelsen and her brother, Torolf, to flee to Stockholm, Sweden in 1943.

While in Stockholm, Kittelsen met Arne Korsmo (the “Norwegian Le Corbusier”). After a short courtship, they married “during a lunch break,” and, together, returned to Norway after the war. During their 15 year marriage, they would collaborate on fine housewares and Kittelsen’s lifelong home, P12.

In 1949, Kittelsen was awarded a Fulbright scholarship and came to the US with Korsmo to study at the Institute of Design at the Illinois Institute of Technology, a new school founded by the renowned Bauhaus artist and intellectual, László Moholy-Nagy.

Upon returning to Norway, Kittelsen continued her work at the family business, where she would be instrumental in the development of new types of enamel, and the design of several successful lines of jewelry, including the “Med Punkter [With Dots]” series and the Domino ring (sold by J. Tostrup for 30 years). Her designs at J. Tostrup resulted in the coveted Swedish Lunning Prize in 1952.

Although she was born into a privileged family, she rebelled against elitism and longed to create designs of “everyday beauty” that could be afforded by all. Perhaps no coincidence, as Norway was experiencing “the golden age of social democracy.” In 1954, Kittelsen began a collaboration with Cathrineholm that allowed her to realize that egalitarian dream.

At Cathrineholm, Kittelsen’s talents as a functional enamel artist were immediately recognized and she garnered critical acclaim and won the coveted Grand Prix award at the 1954 Triennale di Milano for a vibrant blue enameled plate. Kittelsen would go on to revolutionize large scale manufacturing while at Cathrineholm and introduce the Stripes, Saturn and Cathedral collections. Her “Sensation Casserole” would sell 150K units in 1964 alone. Her award-winning designs brought her great success throughout her association with Cathrineholm. Her enamel series would be sold worldwide, and her work would be exhibited at galleries throughout the United States and Canada. In 1972, Kittelsen would be awarded, perhaps, one of her greatest honors, the Jakob prize awarded by the Norwegian Society of Arts and Crafts, an award honoring and bearing the name of her father, Jakob Tostrup Prytz.

Kittelsen, who was said to be “one of the 20th century’s most original and technically talented designers in Scandinavia,” died in 2010 at the age of 93. In her obituary, she was memorialized as “The Queen of Scandinavian Design.”